As I reported a year and a half ago, the bee brain eating parasite is now spreading across the U.S.Â  This is the same fly that injects its eggs into the honey bee, then the eggs hatch, and the bee, being eaten from within, starts to act like a zombie.Â  At least that is what these reports are saying.Â  I mean, are they acting like a Haitian Vodou zombie?Â  Are they acting like George Romero zombies (which are really ghouls)?Â  Are they eating honey bee brains (which judging by the name should be sweet) instead of just honey?
I think they should be called Al-bee-ins since it is more akin to the facehugger of the famous extraterrestial franchise.

On a serious note, how much crap is nature going to through at the VERY necessary Honeybee?Â  I mean they have been in decline since 2004, and they are required for our basic survival.Â  Without pollinators, the food system will collapse, and that is not hyperbole.Â  If that happens, it is us that will have to then turn to eating brains to survive.

A lot of these ugly creatures get a bad rap.Â  As you can see below, this guy looks like a monster:

But in reality he is a rare, deep sea Chimaera.

What an article to come back to from a small hiatus.Â  I am sure you remember my immortal post This Week in Genitalia from this time last year.Â  In it I profiled the benefits of castration, and I debuted a little devil called the Pacu, which is an invasive species of fish that was biting peoples testicles off in Illinois.Â  This fish had TEETH.Â  Like really real teeth.

So today, I am sitting in the offices of the Funk Freedom Press, and Freelance reporter Larry Love of Video Expressions tosses me this news piece of the notorious nut nibbler.Â  Apparently this guy has made his way to New Jersey.Â  It looks like people are buying these feminist jerks and when they get too big, they are dumping them off in the first waist-high lake they can find.Â Â  It was in that article that I learned that these teethy fellows evolved a full set of teeth to crack into tree nuts, which is what they eat in their natural habitat.Â Â  It seems their eyesight isn’t so great, as they are mistaking men’s nuts for tree nuts.Â  Honest mistake.

The FFP took a little bit of a hiatus, and now we are back and better than ever.Â  I am so glad this story appeared on not only a CBS site, but on a very popular aggregate site as well.Â  See this crazy stuff has been going on for decades, and the people who reported it, and those who suspected something suspicious were labeled as cooks and weirdos.Â  Let me elaborate:

For some strange reason, all across this country, cows are basically being cut up under very strange circumstances.Â  Who would want to cut up random cows?!Â  And why cows?Â  Look at that picture above.Â  They are really cute in a gross and stinky way.Â  You might have heard of this phenomenon as “Cow Mutilations”.

Now before you dismiss this totally out of hand, know this:Â  This was reported by CBS.Â  Here is a list of the strange occurrences that are common all across the country:

1.Â  Cows killed and various random parts are being removed:Â  Eyes, Ears, tongue.
2.Â  All the reproductive organs are removed, including coring out the anus.
2.Â  They are removed with surgical precision.
3.Â  There is no blood or fluid.Â  The wounds are micro-cauterized as if removed with a laser.
4.Â  There is no evidence of ritualistic killings, nor is it from a wild animal.
5.Â  It happens for a series of days

So that begs the question:Â  Who is doing this and why?Â  I think the quick answers are what take credibility away from the topic, but something/someone is doing it.

Seems like a lot of trouble to make homemade hot dogs (tongues, ears, and a-holes). 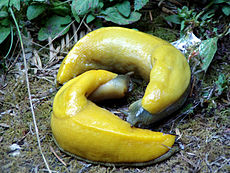 I know everyone has their favorite slug.Â  Hell ever since Vincent Vega donned the UC Santa Cruz shirt in Pulp Fiction, mine has been the Banana Slug (See Above Picture).Â  I just thought they were a bold choice as a college mascot, second only to the Golden Gophers.Â Â  I got to see one of these critters in real life on my first visit to The Mystery Spot in Santa Cruz.Â  They are HUGE for slugs!Â  I was used to caterpillars, snails, earthworms, and the like.Â  The typical link-shaped squirmy creature.Â  I had a mini, albeit masculine, freakout when I first saw these guys.Â  They really look like living bananas, much like a Walking Stick looks like a stick with legs.Â  And man, do they stick to concrete.

Anyway I digress.Â  You can imagine my disappointment/excitement when a cooler, and much more flamboyant slug was discovered in the mountains of Australia: 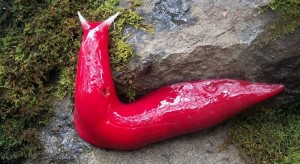 It is truly, bigger, stronger, faster, and more stylish than the lame California slug.

Not to nerd out too much, but the one amazing thing about both of these species is that they are both found in very small regions of the world, on opposite ends of the earth (almost exactly).Â  Brothers?Â  Cousins?Â  Former Lovers?Â  All are possible scenarios.